This month I created my first robot.

I love creating projects. Usually they are just a software, but this time it was different. I wanted to dive into hardware. I knew some electronics, I had a few courses in electronics on university, both analog and digital electronics.

Recently I finished an edX course: embedded - shape the world where I had to write programms for Tiva launchpad. It was a bit tedious, but also a lot of fun.

I decided that I want to to use my new skills to create something awesome... a robot.

A robot is a pretty broad definition My project had a following requirements:

Those requirement doesn't sound impossible. But how do we start?

What do we need to create a robot?

I used atmega32u4 as a brain of my robot.

It's parameters aren't very impressive, but chip is okay for most use cases of begginers.

I wanted a simple chassis and didn't want to create it from scratch, so I bought sparkfun redbot chassis. It's quite cheap and works just fine. It also had simple DC motors.

Apart from chip, chassis and motors I used a simple distance sensor:

It created a radar which I used to scan my environment.

I didn't have a concrete project design. It was developed in small iterations. 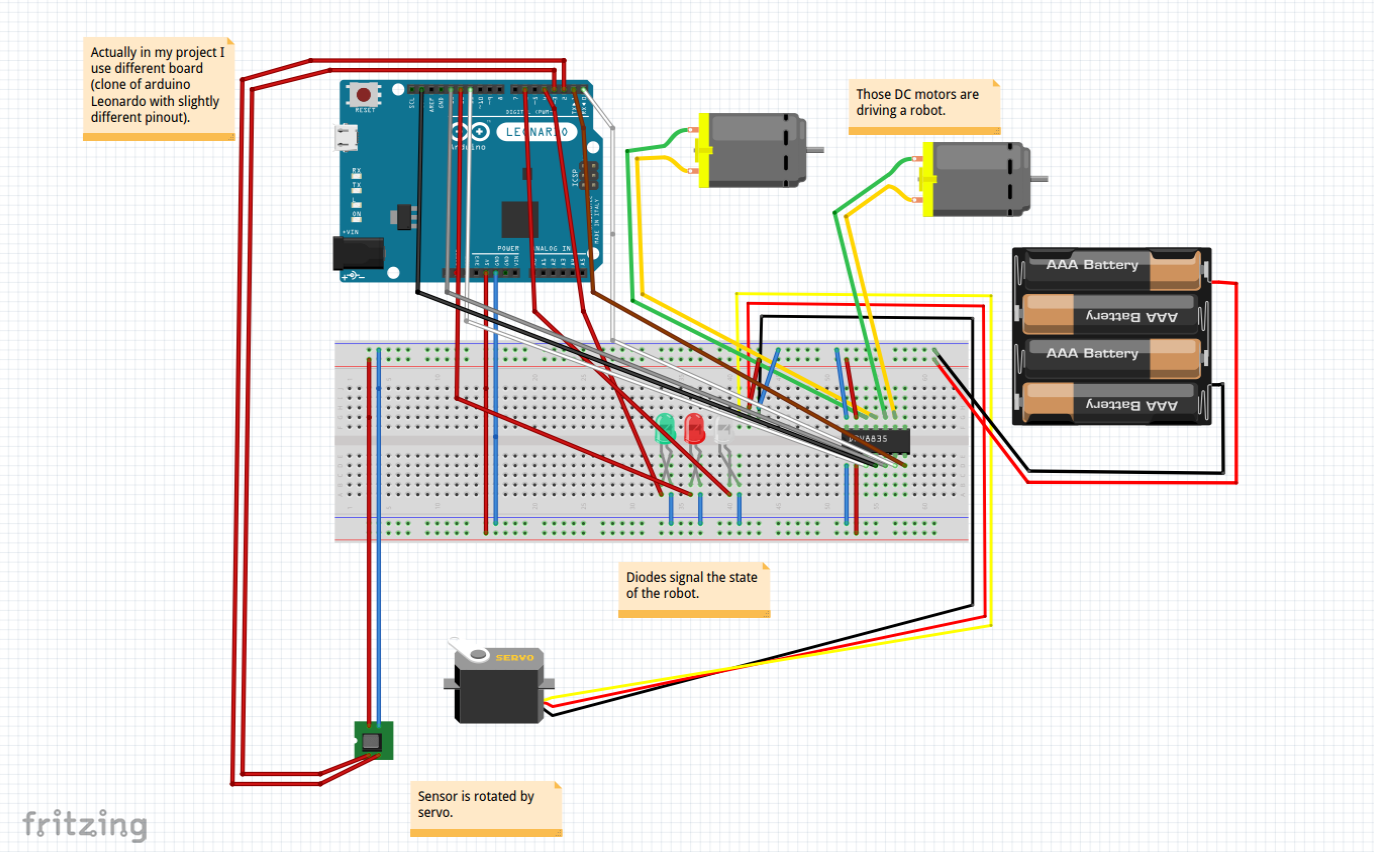 I wanted to finish this project and do it fast. I set myself a goal to finish it in three weeks and after those three weeks open source its code and show the robot to the world.

Having a short deadline was a very good decision. Of course, if I had more time I would probably made some things better, but would I finish it? I don't know, probably not.

It was a bit crappy and wibbly-wobbly, I used duct-tape and zip-ties but learned a lot.

I open sourced on the last day, wrote about it on warsaw-hackerspace mailing list and showed people live. I had a great feedback.

Now, after my first iteration I know something about robotics!

For my next project I would probably used more advanced microcontroller, such as for example tiva launchpad, because I ran out of timer on my small atmega.

I would probably use another sensor, because after I open sourced my code, some people told me that there are much better alternatives which give better sensor data.

Writing documentation and open sourcing my code gave me a lot of satisfaction. My code is now useful for other people and I have a robot: Observing it is a lot of fun, it's a bit clumsy but also cute :).